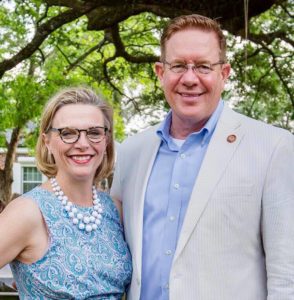 Allison Clune embraces her roles as First Lady of Nicholls and university ambassador.

Born in New Orleans, Allison graduated from Loyola University with a bachelor of business administration degree in accounting in 1987. That same year, she started a career in accounting, beginning at Entergy in New Orleans, followed by General Electric and Baptist Hospital in Pensacola, Florida. She took time off from her accounting career following the births of her daughters, Gabrielle in 1995 and Caroline in 2002.

Being First Lady at Nicholls State is a full-time job, which she loves. In that role she gets to work with the wonderful staff, faculty, and students, including students in Nicholls Bridge to Independence Program. The Bridge program gives students with intellectual disabilities and those on the autism spectrum the opportunity to live the full college experience while earning certificates and degrees that will benefit them for a lifetime.

Other labors of love include the beautification of the Nicholls campus and the enhancement of the university’s image in Thibodaux and around the state. Allison’s influence can be seen in the Cotillion Ballroom and the Andrea and Charlotte Bollinger Suites in the Student Union.

Currently she is working on a project that will construct a new greenhouse to replace the dilapidated one on Bowie Road. In that space, Bridge to Independence students will grow herbs for the Chef John Folse Culinary Institute and Culinary majors will learn how to responsible resource plants. This project is close to Allison’s heart for many reasons, including her love gardening and cooking.

At a university that is 63% first generation college students and 54% Pell-eligible, Allison believes she blessed to have the opportunity to make a difference in the lives of deserving students.

Sandy Rosenthal, Vice President of the Corporate Board for the LCWGB, has received the 2021 First Horizon Award for “superior work by a debut author in Non-Fiction.” from the Eric Hoffer Program for her book Words Whispered in Water: Why the Levees Broke in Hurricane Katrina.

Click Here to order a copy of Words Whispered in Water: Why the Levees Broke in Hurricane Katrina.

On Friday, March 6,  LCWBG Board President Sandra Thompson Herman was honored in a ceremony commemorating her donation of Legacy Papers to the University of Louisiana at Lafayette’s Edith Garland Dupré Library. The collection includes writings, photographs and additional materials documenting a career spanning nearly four decades of leadership and vision.

VP Sandy Rosenthal is featured in an 8-episode podcast about Katrina created by The Atlantic. The work, titled Floodlines: an unnatural disaster also features Gen Russel Honore. It was released on March 12.

Our Vice-president Sandy Rosenthal has announced her book deal with Florida-based Mango Publishing. The book is titled Words Whispered in Water: Why the Levees Broke in Hurricane Katrina. It’s about why Rosenthal founded the grassroots group Levees.org and what was accomplished.
For more, about the new book, click here.
https://apnews.com/7ac762c5782c65e092db2f4320c4c7f3

*There are no upcoming events

Want to get involved in LCWGB?